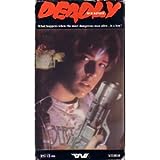 Year:1989
Director:Michael Miner
Written by:Michael Miner (Screenplay), Michael Miner (Story), George Lafia (Story)
Script Synopsis:An expermintal gun powered by an atomic reactor is misplaced when the transport carrying it crashes into a river. The weapon soon falls into the hands of a bullied teen named Zeke, who uses it to get even with his persecutors. An army team led by the overzealous Lt. Dalton is sent to recover the weapon before it's unstable reactor overloads and causes a meltdown.
Deadly Weapon Script Resources: