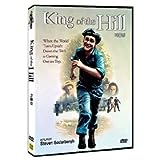 Year:1993
Director:Steven Soderbergh
Written by:A.E. Hotchner (Novel), Steven Soderbergh (Screenplay)
Script Synopsis:Based on the Depression-era bildungsroman memoir of writer A. E. Hotchner, the film follows the story of a boy struggling to survive on his own in a hotel in St. Louis after his mother is committed to a sanatorium with tuberculosis. His father, a German immigrant and traveling salesman working for the Hamilton Watch Company, is off on long trips from which the boy cannot be certain he will return.
King Of The Hill Script Resources: