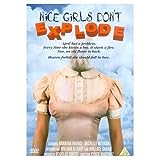 Year:1987
Director:Chuck Martinez
Script Synopsis:April has a problem. Whenever she gets anything like passionate with a guy all sorts of things seem to spontaneously combust. The only men she meets more then once are firefighters. Actually, it's Mom's way of trying to keep her little girl to herself, but new boyfriend Andy is having none of such nonsense. So the heat's on. Unfortunately it's Fluffy the cat who keeps getting caught in the middle.
Nice Girls Don't Explode Script Resources: