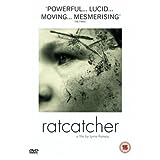 Year:1999
Director:Lynne Ramsay
Written by:Lynne Ramsay (Writer)
Script Synopsis:James Gillespie is 12 years old. The world he knew is changing. Haunted by a secret, he has become a stranger in his own family. He is drawn to the canal where he creates a world of his own. He finds an awkward tenderness with Margaret Anne, a vulnerable 14 year old expressing a need for love in all the wrong ways, and befriends Kenny, who possesses an unusual innocence in spite of the harsh surroundings.
Ratcatcher Script Resources: