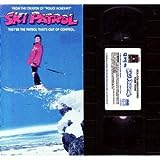 Year:1990
Director:Rich Correll
Script Synopsis:Pops isn't worried about the renewal of the lease for his ski lodge - the safety record is unblemished in spite of the crew of misfits who make up his ski patrol. But a scheming land developer has other plans and the ski patrol is thrust into a skiing showdown in order to save Pops' mountain.
Ski Patrol Script Resources: