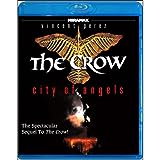 Year:1996
Director:Tim Pope
Written by:James O'Barr (Novel), David S. Goyer (Screenplay)
Script Synopsis:After Ashe and his little son are murdered violently for no reason by Judah's men, he returns from the dead to take revenge. One after one, Judah's people face the power of the dark angel. The second film based on James O'Barr's cult comic.
The Crow: City of Angels Script Resources: