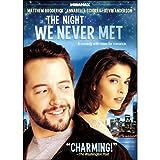 Year:1993
Director:Warren Leight
Written by:Warren Leight (Writer)
Script Synopsis:Sam has a problem with his roommates: they are disgusting, and don't seem to share his views on responsibility, privacy, and basic hygine. Such is his discomfort with his living arrangements that he agrees to share the occupancy of another flat: he gets two nights a week, the owner (a sleazy frat-boy yuppie named Brian, soon to be married) and Ellen (a would-be painter seeking relief from her boring marriage) each get their seperate nights in the flat. Things go extremely well until Sam and Brian swap nights without telling Ellen, who attributes the "nice" things that happen around the place to the slob Brian, while berating the responsible Sam for his hedonistic lifestyle.
The Night We Never Met Script Resources: