In the 1980’s, nobody could hold a candle to Michael Crichton when it came down to sci-fi. With such big hits as

Jurassic Park (1993) and Westworld (1973), Crichton created explosively entertaining stories that attracted the mainstream in record numbers. His ideas ranged from television dramas to big budget films that attracted the attention of directors and producers from all over. What Crichton really had, was an incredible ability to tell original stories that sparked the imagination and curiosity of children and adults alike. 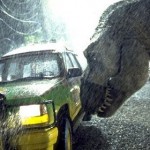 dant amount of lifetime successes. As a young man, he fulfilled what many young people dream which was to be accepted to Harvard University. He was accepted into the medical program but was secretly writing stories in his spare time. His book, The Andromeda Strain (1971) was the result of his secret story writing which is what launched his career as a novelist.

So much can be learned from Crichton but nothing as important as the influence of education on creative works. Without his medical school influences, Crichton may never had created his E.R. (1994-2009) television series. If he wasn’t fascinated with computer technology, then there is no saying whether he would’ve succeeded in making Jurassic Park (1993) or Westworld (1973). His work goes to show that creativity is a result of imagination added to intelligence.