Up until her role as Liam Neeson’s daughter in the epic action/adventure film Taken (2008), she was mostly unknown by the public- 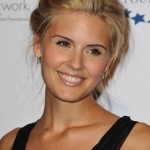 with only a few jobs in mostly unknown films. However, with one lucky break she was able to exponentially grow her career, giving her opportunities in other major motion pictures (i.e. the Twilight Saga). Her career is still up to grabs at this moment, but she has been given a boost that may help her get a foothold in the A-list. All it takes is for her to pick her films carefully for the ones that challenge her the most.