Lana Wachowski, writer of the new blockbuster film Cloud Atlas (2012) appeared to come out of left field as an innovative, exciting new writer in the movie field. However, Lana is not a new writer. In fact, Lana is the new identity of famed writer Larry Wachowski (one 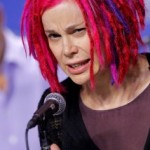 half of the Wachowski brothers) now that she has undergone sex reassignment surgery.
There are not many (known) transgendered people in the public eye, given that it has historically been a taboo and controversial subject over the years. However, with a new generation comes new awakenings, and the public eye has grown to become slightly more accepting to people who are transgendered as well as the rest of the LGBT community.
But is society ready yet for this in-your-face version of what we knew as Larry Wachowski? With her most recent film, Lana has decidedly tried to shed light on the troubles transgendered and LGB people have in society. What she hopes is to create an understanding that will allow people to break down the walls of the LGBT taboo that has long since held in this country.
She may go down in history as a true pioneer who opened the doors to equality for LGBT people in the United States and the world. However, there is always the chance that she may fail. To note, failure does not occur if people get angry at her films or protest against her. Martyrs are often made from hatred, and the more people hate Lara’s films, the greater chance that she will go down in history as a pioneer.
The only way that Lara can fail is if LGBT issues become the sole definition of her career. If she begins to focus on the issues that only influence her life, she risks being seen as selfish and a foghorn for her own personal happiness. This will not influence many- it will be seen as preaching to the choir. Only by keeping herself open to the issues that are faced by others, will Lara be able to create art that is insightful, poignant and groundbreaking.