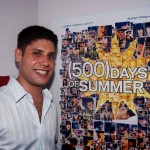 The new Spiderman movie is groundbreaking because it employed many unknowns in high positions- giving many people their big chance to make it in Hollywood. One of these lucky few was Michael Weber, who was hired to direct the film despite his lack of qualifications.

The only major film that Webb had on his record was an interesting Independent film entitled 500 Days of Summer (2009). The film was an indie favorite but did not have the fame or standards of a major motion picture.

However, the movie spoke for itself. With just that one film on his track record, Weber was able to take on the obstacle of creating a feature length film and he did spectacular. His career, which is just taking off, is proof that a person is only limited by their own sense of self worth. The more a person challenges themselves, the more they will be surprised by what they are actually capable of doing.