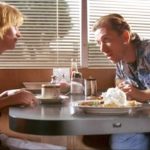 Dialogues are just one of the many mechanisms that can move the plot forward. For some screenwriters though, it doesn’t seem to be a resource, but their chief weapon. While Quentin Tarantino may have become the ultimate modern reference, many other authors have also forged a reputation as masters of dialogue.

Aaron Sorkin has compared dialogue to music. There is indeed a rhythmic nature in the way his characters interact: from courtroom battles to rapid-fire Harvard computing chatter, Sorkin enjoys taking his characters to the limit not by physical, but argumentative exhaustion. 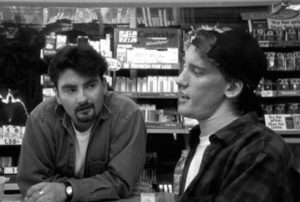 Always proud of his origins, Kevin Smith often uses real life friends as direct models for his characters. The Star Wars exchange in Clerks is both hilarious and genuine: Smith wasn’t afraid of driving the plot with the same kind of conversations he’d have with his own buddies- expletives and pop culture references included.

Which brings us to Richard Linklater, who inspired Smith to start his career. Watching Slacker or the Before trilogy, one might feel that those conversations are going nowhere. But they’re slowly, cleverly taking us to the next point.

Conversations are dynamic, and so are film dialogues, which are as diverse as the minds that crafted them. They can introduce us to the main conflict (Glengarry Glenn Ross), read a character’s thoughts for us (Juno, Fight Club), make outlaws be likable (Point Break, Butch Cassidy and the Sundance Kid) or just captivate us through absency (enjoy The Artist and There Will Be Blood’s brilliant opening!).

Some other examples of films with great dialogues are: