We love film!
For some reason, the film industry loves family teams who direct and/or write screenplays. The Coen Brothers have created innumerable successful for their brother directing team, while the Nolan Brothers have done the same in the 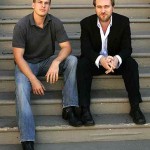 screenwriting industry.
True, these brothers have a much smaller career that has not brought their name notoriety. However, every film that they have written for has turned out to be a major successful. Their work is intricate, detailed and concise: all the things that make up a fanciful story that pleases audience.
In the newest addition to the Dark Knight series, the Nolan Brothers had to deal with the painstaking requirement of editing hundreds of pages of script into a script fit for the screen. In addition, they had to incorporate and base the finalized script on the classic Charles Dickens story, A Tale of Two Cities.
Upon release of The Dark Knight Rises (2012), the future of their career could skyrocket them into a household name. Only time will tell what their future has in hold for them.