With the release of the new Fright Night (2011) film starring Collin Farrell and David Tennant (Dr. Who), many people are dusting off their old VHS copies of the original film that was made in 1985. This is not to say that the remake isn’t any 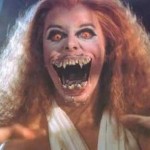 good. In fact, the new rendition of the classic Fright Night could probably be blamed for the rising popularity of the original film which has jumped up to the top 500 films that are searched on IMDB the week of the remake’s release! Amidst all the excitement, Tom Holland (the director and writer of the original film) has come to the attention of the press as being the cause of this uprising of nostalgic horror movie fans… and with good cause!

Tom Holland is a director and writer of horror films including Psycho II and Child’s Play. He has worked alongside big name actors and directors, including Stephen King and Anthony Perkins and has contributed a great amount of distinguished horror films to mainstream audiences. Fright Night was his directorial debut and carries a great amount of his individual style and ideas. His films are notable for their vibrant dialogue, personable heroes and intense film shots. Combined, they have earned Holland a place on the list of the most influential horror film writers/directors of this time.

Notable Films (as Writer and/or Director)