Alvin Sargent is considered one of the great veterans of the film industry, having had steady employment since he started working in Hollywood in the 1960’s. The latest film on his record, The Amazing Spider Man (2012) was a 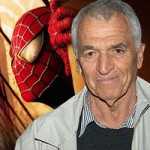 profound success in the box office and charmed audiences with a new depiction of the popularly known tale.

Working in a team of four, including creator Stan Lee, Sargent provided his own unique talents and script writing know-how to the tumultuous task of writing a Spiderman film that was fresh, new and original.

Working with a team of other writers can be a difficult task for any screenwriter to attempt, since the diverse backgrounds and styles can easily turn into a battle for power instead of a collaborative Eden of ideas.

However, the resulting film script ties together well and displays a humanitarian story of good vs. evil as well as the beauty of the human spirit.

Sargent’s experience and knowledge of script writing shows just how powerful time can be in developing a person’s writing ability. At 20 years old, a person may not be the best writer. However, if that person persists, the writing they do as a 30 year old (or older) may show just how much talent they have had all the while.