If a person’s career could be gauged by the types of roles they got in their early career, then Mila Kunis would probably be starring in comedy roles for the rest of her life. She got her first break in That 70’s Show (1998-2006) 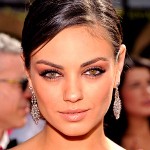 playing the neurotic and self-obsessed Jackie Burkhart, whom was as two-dimensional as a piece of cardboard.

However, Kunis has definitely grown in leaps and bounds since her start there. Despite the fact that she still does comedic work, (i.e. her recurring role as Meg on the long running series Family Guy (1999-2012)) she has also taken on more serious and dramatic roles in other types of films.

If Kunis keeps this up, she may become an A-list star in the future.