One of the most successful actors to come out of the B-movie franchise, Bruce Campbell has built a 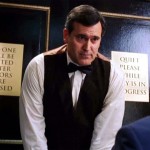 career on his ability to bring humor and a snarky charm to any film that he stars in. While he is mostly known for his B-movie sensations (i.e. The Evil Dead trilogy and My Name is Bruce) he is much more than that. His popularity has stemmed into a career in many forms of entertainment including television, cartoons and video game voiceovers. He has been in major film productions such as Spiderman and Cloudy with a Chance of Meatballs while still maintaining his B-movie king status with underground films (i.e. Man with the Screaming Brain and Bubba Ho-Te

Bruce Campbell has been a successful actor based on his ability to pick and choose scripts that he believed were interesting, whether they were big budget masterpieces or low-budget slasher flicks. Even if his role is limited to a bit part or cameo appearance, he recognizes potentially good films and makes sure that he was part of the experience.  Because of his ability to work with such a humble mindset, he is most assuredly going to be a successful actor for many years to come. His filmography is a beneficial tool for understanding how to maintain long term success in the film industry.