Bruce Willis is one of the most successful actors in American film industry. Not only does his name attract audiences by the truckload, but his films are often some of the top grossing movies of the time period.

Much of Willis’ success can be attributed to the fact that he stars in some truly epic films. The Fifth Element (1997) and Die Hard 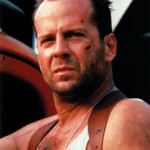 (1988) were big budget masterpieces that Willis complemented with his strong acting ability. He did not have to carry the films entirely on his shoulders. However, he also takes risks. The film Pulp Fiction (1994) was Quentin Tarantino’s directorial debut and could have been a box office flop. However, Willis took the risk and reaped the benefits when the film became a cult classic.

When it comes to scripts, Willis is able to choose roles that will further the audiences’ perception of the type of person that he is. In Willis films, he is always the hero. Audiences expect him to do what is right and to be uncorrupted by

greed or personal gain. By choosing roles that contribute to this perception, Willis makes a place in the heart of the audience as the knight in shining armor.

As long as audiences believe that Willis is this sort of hero, they will always support him in the box office. It’s kind of like supporting your father when he starts a new business or supporting a close friend during a troubling time. Even if the film is not that interesting, people will still see it because Willis has created a place in their hearts.

Below is a list of Willis’ films throughout his career as an actor. By reading them (especially Willis’ roles), an actor can learn to recognize the same cues that Willis did in his path to creating this persona; and then they may be able to create a personality for themselves that is marketable.

As a screenwriter, these scripts give invaluable cues on how to get the actor you want. If you want an actor like Bruce Willis then you have to make sure the role suits his perceived personality. And once you have a big name star like Willis, your chances at success are enormous.