Chris Hemsworth can be considered a “newcomer” to the film industry, given that he has only starred in a few films. However, prior to his first role in Star Trek (2009), Hemsworth was a television actor. After a few bit parts and one recurring role in the show Home and Away (2004-2007), he was able to get his break into the movie industry and has 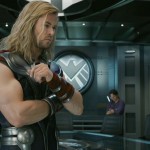 been rising ever since.

With his role in the popular new film The Avengers (2012), he is bound to push through into the A-list of movie actors. In addition, he is working on several upcoming projects which will continue to help his career such as Snow White and the Huntsmen (2012) which is soon to be
released.

There’s no disguising the fact that his career is being blessed with great stories that will help develop the way audiences perceive him. Through good screenplays he may become the next big thing in the film world.