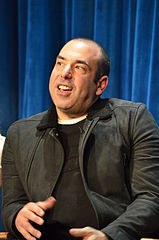 Rick Hoffman is all New York, from his Brooklyn accent to his attitude. He may have moved to Los Angeles for a film career, but his soul is pure New York.

Rick’s career started inauspiciously, as he nervously flubbed his only two lines in his very first film, Conspiracy Theory. Fortunately, his co-star Julia Roberts and director Richard Donner laughed, and the “flubs” were kept in the picture.

Between 1997 and 2007 he made 15 films, including Lethal Weapon 4, The $treet, Philly and Blood Work. Another ten years were spent doing character bits on many top shows, including Law and Order SVU, CSI: Miami, Without a Trace, Crossing Jordan and The Practice, to name a few.

These days this quirky, versatile character actor with the rubbery face can be seen on television, playing the role of attorney Louis Litt on USA Network’s series, Suits.