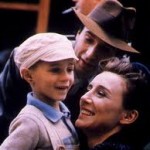 The Holocaust of the Jewish people was one of the most terrible incidents in recent history. Millions of Jews were deprived of their rights, placed into concentration camps and suffered intolerable tortures during their stay. The people were treated like stains that needed to be expelled out of existence.

In modern society, the Holocaust proves to be a reminder of the dangers of racism and discrimination based on religion or heritage. It is also a lesson in hope, perseverance and faith. Film makers have tried to capture the fear and hope that intertwined behind the gates of concentration camps during that time. However, it is a difficult task.

The Holocaust is something that should be shown in a graceful manner; with disregard to cheap film tactics and emotionless scripts. For anyone who chooses to write a film about the Holocaust, they should remember it was a true story that affected the lives of millions of people. Their lives should be respected in a retelling of their experiences. The following films are a good example of how to write a poignant yet respectful script.