World War 2 is (oddly) one of the most marketable and popular wars in recent history. The public still flocks to films that depict incidents of this war, whether they are true or false. In addition, video games have been published that allow people to

experience World War 2 battles from the safety of their own home.

This war distinguishes itself from any other recent war because most people symbolize it as a battle of good versus evil. To many people, the Nazis were one of the most sadistic groups that ever existed. Their leader, Adolf Hitler, is considered a racist who allowed millions of civilians to be killed based solely on their race.

Through this war, many countries learned what a real enemy looks like. Upon seeing the treatment of prisoners in concentration camps, the rest of the world determined what was truly worth fighting f 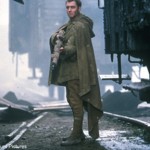 Many films have been made about World War 2, but there are still many perspectives that haven’t been shown. Below is a comprehensive list of films that are focused on the actual battles that took place. These films are expressive, emotional and gut-wrenching. They can also be humorous, odd or disturbing. They show many different perspectives that are based on World War 2.

By reading these, you will gain understanding about what type of films can be made based on a World War 2 theme. Then all you must do is use your creativity to add a new element. Good luck!

(If you are interested in films about the concentration or POW camps, please refer to the scripts-onscreen.com search box.)