What is there not to like about Emma Stone? The beautiful 23 year old redhead represents everything good about women. She is good humored, considerate and wears her heart on her sleeve. Some people want to marry her while 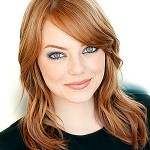 everyone else wants to be her best friend.

Needless to say, she is fast becoming the sweetheart of the American public. While her career only consists of a few movies, they are all films that characterize the personality that audiences have grown to love about her. Even in the new Spiderman film, her personality shines and transforms her character into something more like herself. She is not becoming the character- the character is becoming her.

Stone will likely have a strong career for a very long time due to her ability to choose roles that portray her as an honorable, good-natured young woman. The more people see this in her, the more they will root for her in every film that she follows in.