Rob Zombie (birth name “Robert Bartleh Cummings”) has one of the most interesting film careers from recent history. He did not start out as a filmmaker. He was merely a very famous and well respected musician. However, somewhere down the road of success, this avant garde horror lover decided to take a stab at the film world by creating his own series of violent splatter fest films. Starting 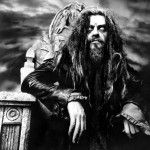 with his hugely popular House of 1000 Corpses (2003), Rob Zombie revolutionized the way that horror was presented in a way that shocked and mesmerized horror fans nationwide.
The keys to Zombie’s success lays solely upon his passion and his ability to focus on his work. No matter what he does, he is successful because he works from his heart- taking on tasks that compliment his style and personal tastes. Prior to his first film, Zombie did a tour of his house on the docu-style MTV show Cribs (2000) where he showed off his large collection of horror movies. The sheer vastness of his collection captured the intensity in which he adores a good scary movie. The community of movie macabre lovers must be grateful.