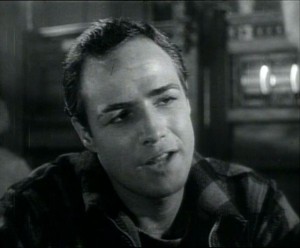 Marlon Brando was born in Omaha, NE in 1924. He was a rebellious child who was, early on, thrown out of military school. In the early 1940s he left for New York, first to study the Stanislavsky Method with Stella Adler, and later working at The Actor’s Studio with Lee Strasberg. By 1943 he had his first Broadway role, in Bobino, then in I Remember Mama the following year.

It was 1947 when he was given the role that made him a household name: the sullen and brutish Stanley Kowalski in Broadway’s production of A Streetcar Named Desire. With the success of this role, the world beat a path to his door. In what would become de rigeur for Brando, he rejected all of Hollywood’s overtures, choosing to continue his work on Broadway for several more years.

It wasn’t until 1951 that he made his first film, reprising his role as Stanley in the Elia Kazan movie of Streetcar. A hugely successful film, he was nominated for, but did not win, the Academy Award for Best Actor (although his three co-stars – Viven Leigh, Karl Malden and Kim Hunter – won their respective awards, and the picture was voted Best Picture.)

His next films – Viva Zapata!, again with Kazan, Julius Caesar and The Wild Ones, were all commercially successful and well received critically.

In 1954 he gave what was, in the view of many, his finest performance, as washed-up boxer Terry Malloy  in Elia Kazan’s On the Waterfront. A commercial and critical success, Brando won his first Academy Award. He was thirty years old and had, perhaps, reached the pinnacle of his career.

A number of failed projects followed, interspersed with a few commercial successes, like Guys and Dolls, where he co-starred with Frank Sinatra, and Sayonara, for which he received yet another Oscar nomination. In 1958 he co-starred with Montgomery Clift in The Young Lions, another well-reviewed commercial hit.

As he piled up the failures – The Fugitive Kind, Mutiny on the Bounty, Napolean, One-Eyed
Jacks, The Ugly American, The Chase, A Countess from Hong Kong, Reflections in a Golden Eye, Candy, Quiemada!, The Nightcomers – he became increasingly unpopular with studio heads. He had become outspoken about his profession – declaring acting a “neurotic, unimportant job” – and very publicly played the role of arrogant and disrespectful anti-star, much to the dismay of the studios and directors who paid his salaries.

It was over the objections of Paramount Studios management that Francis Ford Coppola chose Brando for his role as Don Corleone in the 1972 classic, The Godfather.  His performance in the film was tremendously well received by both the critics and the public, and he won his second Academy Award. Unfortunately, he squandered much of that adulation when he chose to send a fake Native American spokeswoman – really a Hispanic actress dressed as a Native American – to receive the award, giving her the opportunity to make a speech about the history of the US government’s “crimes” against native peoples.

After a few movies that he made – by his own admission – just for the money (including the well-reviewed Last Tango in Paris, Missouri Breaks with Jack Nicholson and Superman,
(for which he earned $3.7 million for a tiny role) he was cast as Col.Kurtz in Coppola’s Apocalypse Now.

After just one more appearance, in 1980’s The Formula (in which he appeared in only three scenes) he disappeared from Hollywood and retired to his private island in the Pacific, emerging only once to play a supporting role in the anti-apartheid drama A Dry White Season, for which he won another Academy Award nomination.

In 1992, after several family tragedies drained his finances, he went back to work, appearing in a series of forgettable films, including Christopher Columbus: The Discovery, Don Juan DeMarco with Johnny Depp, The Island of Dr.Moreau,and The Brave, which was Depp’s directorial debut.

In 1998 he co-starred with Martin Sheen, Charlie Sheen, Donald Sutherland and Mira Sorvino in Free Money, after which he again disappeared to his island. In 2001 he re-emerged to make his final film appearance, in Frank Oz’s The Score, with Robert Deniro, Angela Bassett and Edward Norton.

In 2004 he passed away, the result of pulmonary fibrosis. He was 80 years old.